The sunfish is one of the strangest looking fish in the ocean and one that divers from all around the world want to see. 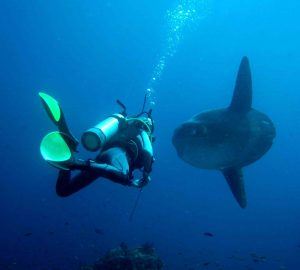 It’s a pretty amazing fish – it is actually the heaviest known bony fish in the world and can weigh in at over 2,200lbs. Mola have two dorsal fins which make them as tall as they are long. The most distinguishing feature of the mola is its main body area – of which there is very little – and which is flattened laterally. This strange shaping explains the German name for the fish – ‘schwimmender kopf’ which translates literally to ‘swimming head’.  The word ‘mola’ is actually latin and means ‘millstone’ perhaps referring to either the shape or marbled coloration of the fish which is very typical in the Mola Ramsayi species commonly seen around Nusa Penida.

Mola live on a diet of nutritionally poor jelly fish and to maintain their body weight they consume huge quantities. Ordinarily they are deep water fish but they are seen around Nusa Penida from July to October as they drift up the reefs on the cold thermoclines making their way into the shallower waters. Because mola are very seasonal we dive over at Penida almost every day during the season and our Bali Scuba Divemasters have become expert mola spotters!  Year round mola carry an incredibly heavy parasitic load and these giant fish rely on some of the reefs smallest inhabitants to unburden them through cleaning.

Mola cleaning is an incredible sight as this huge fish, which averages around 2 meters, cruises up the reef hoping to attract the attention of the smaller reef fish. Banner fish are one of the great mola cleaning fish and can be seen literally leaving the reef in swarms as they flock to the mola. Other cleaner fish include cleaner wrasse which primarily clean around the gills and mouth, butterfly fish which focus on the eyes and even emperor angel fish have been seen cleaning the dorsal fins. Another means by which the mola is thought to rid itself of parasites is by ‘jumping’ – a phenomenon often witnessed by fishermen, boat captains and Bali Scuba divers during surface intervals! The mola will break through the surface and then crash back down creating an almighty splash which is thought to break off parasites in the process.

They are a truly Jurassic looking fish which, as a member of the order Tetraodontiformes, are closely related to pufferfish, porcupine fish and triggerfish. The mola is also referred to as the Balinese Sunfish (or Moonfish to the French – Poisson Lune). The name sunfish is thought to come from its habit of ‘sunbathing’ on the surface of the water.

Despite being such a large fish, mola are very shy and often stay out in the blue away from divers. When they come to the reef for cleaning divers should always stay close to the reef and not swim after them. They are easily scared away but if you remain calm and quiet you could be rewarded with an amazing mola encounter that lasts for minutes! Your Bali Scuba Divemaster will remind you about this during your dive site briefing on board our speedboat.

If you are interested in seeing these amazing fish for yourself check out Bali Scuba day trips to Nusa Penida, we will pick you up from your hotel and take care of all logistics – all you need to do is enjoy your 3 dive trip – and look out for mola!